The seven planning regions in Southwest Ontario span from Windsor to Niagara and north to Bruce County.

Regional electricity planning in the Burlington to Nanticoke region is divided into three sub-regions – Brant, Bronte and Hamilton.

Planning is Underway in Burlington to Nanticoke

The last regional planning process cycle for the Bronte sub-region was completed in June 2016 and an Integrated Regional Resource Plan (IRRP) was released.

The last regional planning process cycle for the Brant sub-region was completed in April 2015 and an Integrated Regional Resource Plan (IRRP) was released.

The Regional planning cycle is underway for the Hamilton sub-region, and an Integrated Regional Resource Plan (IRRP) has been completed.

A Scoping Assessment Outcome Report and Terms of Reference for the Hamilton sub-region was finalized and posted in September 2017, following a two-week comment period.

The final IRRP was posted in February 2019 after a public webinar and two-week comment period. See further details on the community engagement initiative.

Regional Planning in Burlington to Nanticoke

The Brant sub-region was under study before the formalization of the regional planning process by the Ontario Energy Board in 2013.

For the remainder of the Burlington to Nanticoke region, Hydro One completed a Needs Assessment in May 2014, which was followed by an IESO-led Scoping Assessment. The assessment report, completed in September 2014, identified that in addition to an Integrated Regional Resource Plan (IRRP) for Brant, an IRRP would also be the appropriate planning approach for the Bronte sub-region. 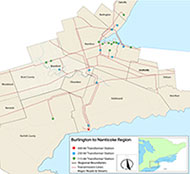 The Brant and Bronte IRRPs were completed in 2015 and 2016,  respectively. Hydro One subsequently undertook a Regional Infrastructure Plan (RIP) for the region which was completed in February 2017.

The local distribution companies providing service to customers in the area include: