The Stakeholder Advisory Committee provides appointed stakeholder representatives with the opportunity to present advice and recommendations on market development, conservation and planning decisions directly to the IESO's Board of Directors and Leadership Team. Members represent consumers, generators, distributors/transmitters, related businesses/services and Ontario communities. Stakeholders are encouraged to contact their SAC representative to provide input on issues that affect them. 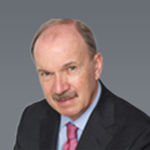 David Butters is a member of IESO's Stakeholder Advisory Committee, representing the sector of generators.

Mr. Butters has been APPrO's president and chief executive officer since April 2004.

He has an extensive background in government, government relations, and corporate and advertising communications.

Prior to joining APPrO he was Vice President, Public Affairs for Hill & Knowlton Canada, with responsibility
for their national energy practice. He was also Chief of Staff to a senior cabinet minister in the government
of the Honourable Brian Mulroney, PC.

Mr. Butters is a graduate of York University in Toronto.