Ontario’s grid is connected to electricity systems in neighbouring provinces and states, allowing the province to be both an importer and exporter of electricity. Being a part of a larger North American network is an advantage for electricity customers in Ontario – it helps maintain the affordability, reliability and sustainability of Ontario’s electricity system.

The Value of Imports and Exports

Having an electricity grid that is connected to the larger North American network provides Ontario with access to a number of neighbouring electricity systems, which enhances operational planning flexibility. These intertie connections help: 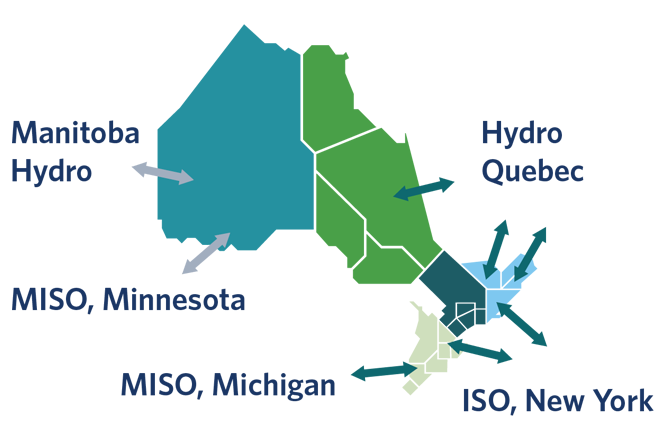 Staying Within Our Limits

Ontario maintains grid connections with Manitoba, Quebec, Minnesota, Michigan and New York, actively importing and exporting electricity on a daily basis. The amount of energy intertie transmission lines can transport at one time is limited.

The IESO’s system operators are constantly balancing these limits with Ontario’s energy needs, ensuring we import and export electricity as efficiently and cost-effectively as possible.

Ontario imports and exports electricity efficiently, as part of the regular operations of the provincial wholesale electricity market.