The Northwest regional planning area includes the area roughly bounded by Lake Superior to the south, the Marathon area to the east, and the Manitoba border to the west. It includes the districts of Kenora, Rainy River and Thunder Bay.

The regional planning cycle begun in 2010 for the North of Dryden sub-region was completed in January 2015 and an Integrated Regional Resource Plan (IRRP) was released.

The North of Dryden area is forecast to experience some of the highest growth in electrical demand in Ontario. This is due to global demand for a number of minerals extracted in the area, and above-average population growth in the remote First Nations communities which have plans to connect to the IESO-controlled grid in the latter part of the decade.

Documents referenced on this page, but not posted, can be obtained by contacting customer.relations@ieso.ca with a link to the web page that lists the document and advise whether it needs to be provided in an accessible format. Please allow a minimum of one business day for a response. 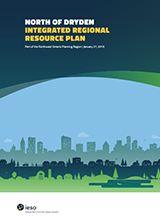 The North of Dryden IRRP was developed by a Working Group led by the IESO, working with existing and potential future industrial customers, local distribution companies and transmission companies/proponents in the area to ensure their plans for development are factored into the analysis. Hydro One Networks Inc. also provided analytical and technical support in developing planning options and cost estimates.

Municipal engagement and Aboriginal consultation were conducted in the development of the 2015 IRRP. Proponents of the two proposed initiatives are responsible for further engagement on these projects. In up to five years, the IESO will revisit the plan, and community members in the region will be reengaged. See the engagement details for the 2015 IRRP. 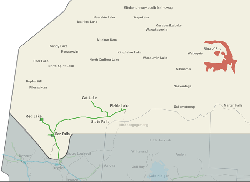 The North of Dryden IRRP involves a sub-region of the Northwest and includes the area extending northward from Dryden to the towns of Ear Falls, Red Lake, Pickle Lake and surrounding areas. Electricity to the sub-region is currently supplied by the 115-kilovolt (kV) Hydro One transmission system.

The Ring of Fire mining development is also a major consideration in the medium to long term for the North of Dryden IRRP.

It should be noted that the study area does not include supply to the town of Dryden or Sioux Lookout. Supply to these communities is included in the West of Thunder Bay study.