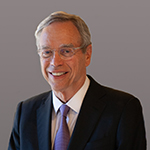 Joe Oliver is the former federal Minister of Finance, Minister of Natural Resources, Minister Responsible for the GTA and Member of Parliament for Eglinton-Lawrence. As finance minister, he represented Canada at G7, G20, IMF and World Bank meetings of finance ministers and governors of central banks. He co-chaired the G20 committee responsible for generating and overseeing country plans to increase global growth by $2 trillion.

He graduated from McGill University with a BA and bachelor of civil law degree and from the Harvard Business School with a MBA. Mr. Oliver was granted an ICD.D designation from the Institute of Corporate Directors.

Return to the Board of Directors