The single regional planning area for Northwest Ontario has been divided into four planning sub-regions.  Information on the remote community connection plan can also be found in this section. 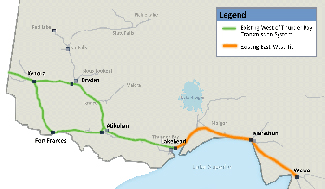 The East-West Tie Expansion was identified as a priority transmission project in the 2010 and 2013 Long-Term Energy Plans. The purpose of this project is to provide a long-term, reliable electricity supply to Northwest Ontario to enable forecast demand growth and changes to the supply mix in the region.

The East-West Tie Expansion project consists of a new 230 kV transmission line roughly paralleling the existing East-West Tie Line between Wawa and Thunder Bay. The new line will increase the electricity transfer capability into Northwest Ontario from 175 MW to 650 MW, and will improve the flexibility and efficiency of the Northwest electricity system. As part of this project, upgrades are being planned for the Lakehead, Marathon, and Wawa transformer stations to accommodate the new line. This project is planned to be in-service in 2020.

The Ministry of Energy notified the OEB, by letter dated March 10, 2016, that the Lieutenant Governor in Council made an order declaring that the construction of the East-West Tie Expansion transmission line is needed as a priority project. The construction of the line is still subject to OEB approval for Leave to Construct. For more information, see East-West Tie designation proceeding (EB-2011-0140/EB-2015-0216) on the OEB website.

On August 4, 2017 the Minister of Energy requested that the IESO update the need assessment for the East-West Tie transmission project, consistent with the scope of previous need assessments requested by the Ontario Energy Board, to be delivered to the Ministry by December 1, 2017. Read the Minister's letter.

On December 1, 2017, the IESO submitted to the Minister of Energy an updated need assessment for the East-West Tie Expansion project. This report confirms the rationale for the project based on updated information and study results. This project continues to be the IESO’s recommended option to maintain a reliable and cost-effective supply of electricity to the Northwest for the long term. Read the report. Read the Minister's response to the report here.

On January 30, 2019, the Minister of Energy, Northern Development and Mines, issued a letter to the Ontario Energy Board (OEB), stating that the Lieutenant Governor in Council made an order to amend Nextbridge’s electricity transmission licence to include a requirement that it develops and constructs the East-West Tie Project. The directive also requires the OEB to amend conditions of Nextbridge’s transmission licence to require regular reporting of construction schedule, costs and risks to the OEB and the IESO.  Read the Directive and the Minister’s  letter.

The OEB issued its Decision and Order on February 11, 2019, as per the Directive, granting Nextbridge Leave to Construct the East-West Tie project. Nextbridge expects the project will be in-service in 2021.  Read the OEB Decision.

The Northwest Bulk Transmission Line Project will augment the capacity and maintain the reliability of electricity supply to the area West of Thunder Bay.  The IESO has sent a letter to Hydro One requesting it begin development work to shorten required project lead time. The IESO will continue to monitor electricity demand in the region to determine if and when construction should begin.